Background: The present study was undertaken to evaluate the most suitable recent restorative material for extensively mutilated teeth.

Conclusion: Among the experimental groups, Estelite sigma quick composite showed the highest fracture resistance. Statistically, a significant difference was seen between all groups.

Restoration of extensively carious teeth is one of the biggest challenges in dentistry. Many types of research and advancements on the molecular level are going on to overcome the shortcomings such as polymerization shrinkage, microleakage, water sorption, and technique sensitivity, leading to the evolution of composites with improved properties.[1]

Recently, time-saving composites are introduced which can be placed in 4–5 mm bulk and cured in one step. Rheology of bulk fills is such that it allows better adaptation to the cavity walls with self-leveling effect.[2]

Fiberreinforced Ever X posterior composite consists of the combination of Eglass fibers and barium glass filler, fiber length in millimeter scale is 1–2 mm.[2] Within a tough polymer matrix fibers helps in stopping the crack progression same as the function of dentine, rendering it a perfect material of choice in large size cavities(MOD).[3] It is basically a dentine replacement composite and needs to be covered proximally and occlusally with conventional composite simulating enamel coverage.[4]

The null hypothesis tested will be that there will be no difference in the fracture resistance of intact teeth and those restored with different composite materials.

Sixty human maxillary premolars collected from department oral and maxillofacial surgery which was extracted for orthodontic reason, were used in the study. Power and the sample size of the study were calculated by IBM ® SPSS ® 21 SOFTWARE (IBM, Hong Kong). All the specimens were scaled to remove the adhering soft tissue and calculus and were stored in physiologic saline. Fully erupted teeth with mature apices, intact enamel and dentine without any carious lesion, restorations, and developmental defects were included. Teeth with open apices or resorption, previous restorations, or with any anatomical variation were excluded from the study. 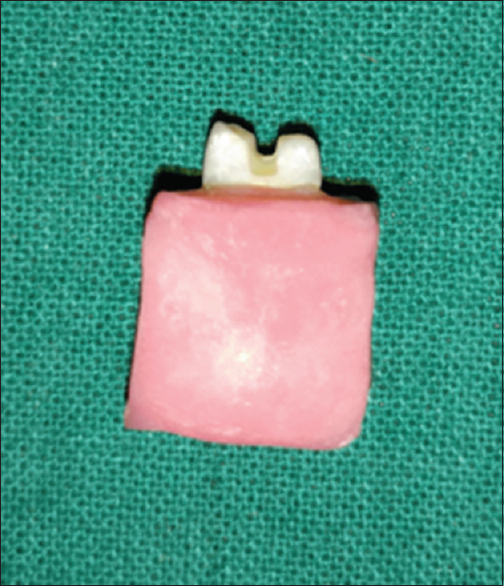 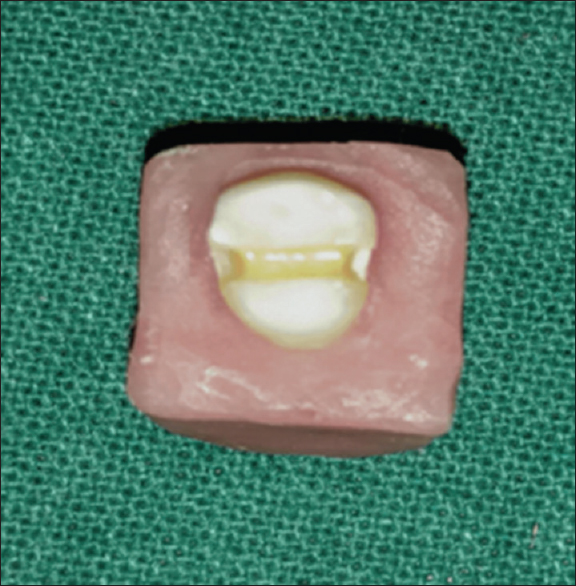 Bulk-fill posterior composite was placed in bulk without any incremental technique and cured for 30 s [Figure 3]. 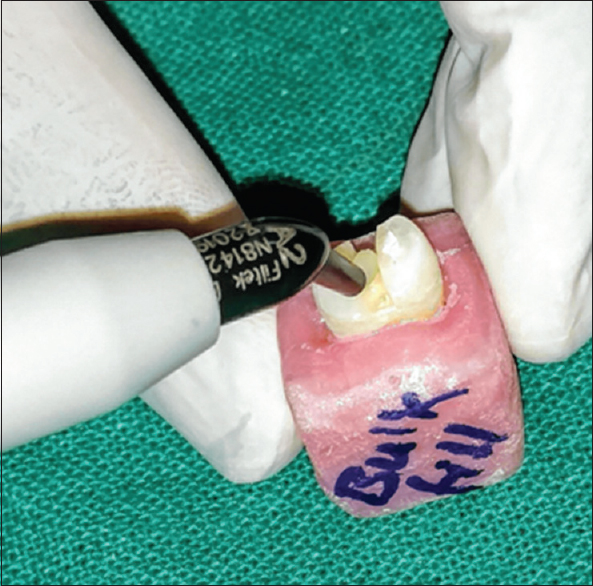 In this case, walls of the MOD cavities were built by microhybrid Coltene Swiss Tec composite followed by placement of Ever X posterior composite in the core. The restoration was completed by placing a 0.5 mm layer of microhybrid composite on the occlusal surface [4] [Figure 4]. 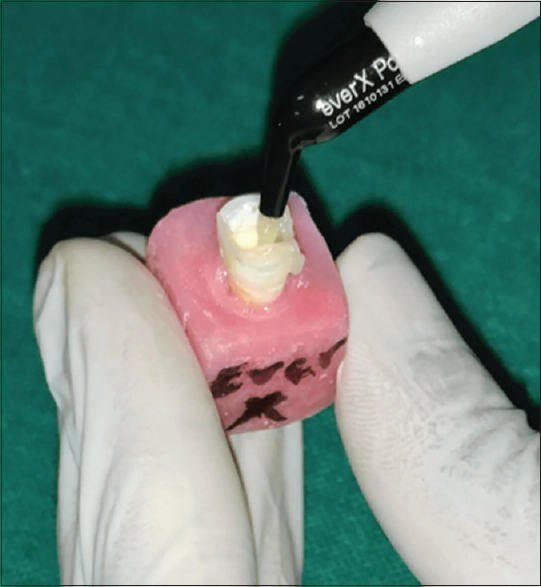 Estelite sigma quick composite was placed by incremental technique and cured for 10 s for each increment [Figure 5]. 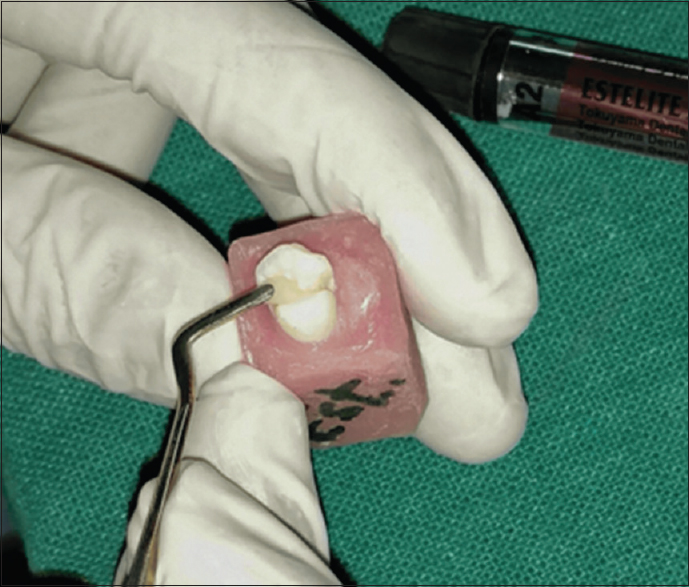 Manufacturer's instructions were followed while placing and curing the composites.

Thermocycling (SD Mechatronik, Germany thermocycler) was carried out 500 cycles at 5°C ± 2°C–55°C ± 2°C with 30 s dwell time and 5 s transfer time. Then, the specimens were stored in an incubator (Bioline technology, India) at 37°C and 100% humidity for 24 h. Teeth were mounted in square blocks of cold cure acrylic resin 2 cm in dimensions up to 1.5 mm apical to the cement–enamel junction. A layer of light body elastomeric impression material was applied around the root surface to simulate the periodontal ligament. The fracture resistance of the teeth was measured using an Instron India universal testing machine (model 1011). Each specimen was subjected to compressive loading using a 5 mm round diameter stainless steel ball at a strain rate of 2 mm/min. The ball should contact the inclined planes of the facial and palatal cusps beyond the margins of the restoration, which will simulate the tendency of the masticatory forces deflecting the cusps under stress. The force necessary to fracture the specimen was recorded in Newton (N), and data obtained were tabulated and subjected to the statistical analysis using IBM SPSS Statistics professional software.

Highest mean fracture resistance was observed with Group 4 Estelite sigma quick (1432.60 N) followed by Group 3 Ever X posterior (1326.20 N), Group 1 Intact teeth (1288.53 N), and Group 2 bulkfill posterior composite (946.66N) [Figure 6]. One-way ANOVA test [Table 1] and [Table 2] revealed a statistically significant difference (P = 0.005) between the groups. On intergroup comparisons, Post hoc Tukey test [Table 3] revealed that there is a statistically significant difference in mean fracture resistance between the Group 2 and Group 4 (P = 0.004), as well as between the Group 2 and Group 3 (P = 0.033). However, there were no differences between the other groups. 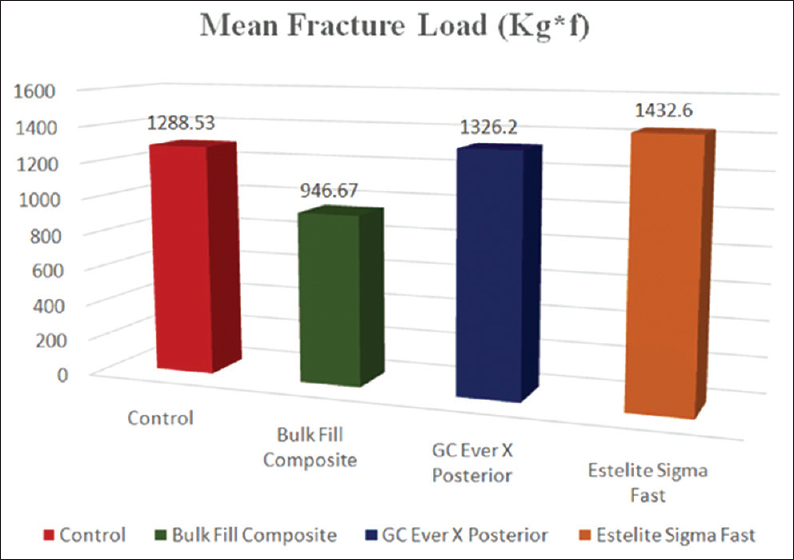 Fracture is a complete or incomplete break in a material resulting from the application of excessive force.[7] Fracture resistance is directly related to the stoppage of the crack propagation. Masticatory forces have a tendency to deflect cusps, and composites decrease the deformation of the cusps under masticatory load.[8],[9]

The variation in strength between different composites may be explained due to the differences in the chemical composition of their matrix, filler content, filler size, and distribution.[9],[10] Thus, a reduction in size and increase in the volume of fillers are directly proportional to an increase in compressive strength and surface hardness.[10],[11]

High filler loading increases the physical and handling properties of the composites, new adhesive materials not only seal the margin but also increase the retention and resistance properties of the restored tooth.[12] Recent nanofiller technology with nanometric fillers impregnated in nanoclusters leads to high filler loading resulting in an increase in high compressive strength and flexural strength.[13],[14]

Bulk filling all of the tooth preparation with a composite at one time has obvious advantages for both patients and practitioners. The manufacturers claim that the bulk-fill materials can achieve a depth of cure of 6 mm.[15],[16] Bulk-fill technology not only results in fewer voids in the mass of the material since all of it is placed at one time but also would be faster than placing numerous increments.

Filtek™ Bulk Fill Posterior contains two novel methacrylate monomers that, in combination, act to lower polymerization stress. A high molecular weight aromatic urethane dimethacrylate decreases the number of reactive groups in the resin. This helps to moderate the volumetric shrinkage. The addition–fragmentation monomers contain a third reactive site that cleaves through a fragmentation process during polymerization. This process provides a mechanism for the relaxation of the developing network and subsequent stress relief. The fragments, however, still retain the capability to react with each other or with other reactive sites of the developing polymer.[17]

Radical-amplified photopolymerization initiator (RAP technology) is used in Estelite sigma quick. The initiator balances the high polymerization activity needed to cure the resin with short exposure times (one-third of that required by conventional composites) and requires exposures of 10 s or less. To achieve high esthetic qualities, it has a suprananofillers 0.2-μm mono-dispersing spherical filler (Si-Zr). Particle diameters of 0.2 μm are known to produce the best balance of material properties and esthetics. Estelite sigma quick itself resists wearing without causing unusual wear in opposing teeth. It resists absorbing stains from substances such as coffee better than conventional products.[19] It is 82% filled by weight, which allows it to have excellent strength and durability to withstand the demands of the posterior dentition and the harsh environment of the oral cavity.[18]

Fibers incorporated into a composite material greatly enhances its mechanical property. The fibers present helps in stopping crack propagation when the stress is transferred from the matrix to the fibers.[20] Ever X posterior containing E-glass fibers of 1–2 mm in length impregnated within the nanohybrid composite could be used in 4 mm increment. The difference in fracture toughness between materials may be due to the inorganic filler loading – 76.5% by weight in bulk-fill composites, 53.6% in Ever X posterior, and 82% in Estelite sigma quick. The highest filler loading in Tokuyama Estelite sigma quick provides excellent strength and durability.

The present results were obtained in optimized laboratory settings; however, clinical conditions are not similar and the aspects such as insertion and handling could have a potential effect on the mechanical properties of the materials and their performance.

Maxillary premolars were chosen as they are more prone to fracture due to the anatomical shape with steep cuspal inclines which leads to cuspal separation during mastication.[4] MOD cavities were prepared in the teeth as these are considered to be the worst in terms of fracture resistance.[22]

Any relevant study could not be found comparing bulk-fill posterior composite, Ever X posterior along with Estelite sigma quick, and hence, the results of the study cannot be substantiated with those of any other studies.

Within the limitations of this study, maximum fracture resistance is shown by the Tokuyama Estelite sigma quick composite.

There are no conflicts of interest.